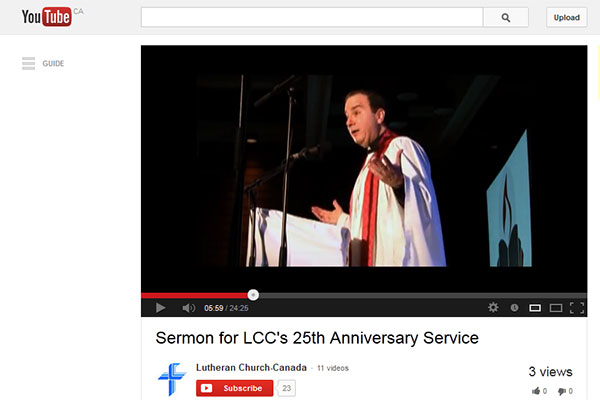 WINNIPEG – Twenty-five years ago in May 1988, pastors and congregational representatives from across Canada converged in Winnipeg to hold Lutheran Church–Canada’s (LCC) founding convention.
The first weekend of July 2013 saw Lutherans converging on Winnipeg once again, as LCC celebrated its 25th anniversary.

Hundreds of youth from across Canada gathered to take part in “Stand Firm,” LCC’s National Youth Gathering (NYG). At the same time, adult Lutherans gathered for Reach Out Canada (ROC), a conference dedicated to equipping Christians to share the Gospel in every day life situations. The two events came together for a number of events, notably the 25th Anniversary Celebration Service Sunday, July 7 at the University of Manitoba. They were joined for worship by a number of local LCC congregations, who forewent services at their own buildings to be part of this special event.

In total, approximately 650 people attended the worship service. An offering was taken to support LCC’s national and international missions and social ministry projects, with more than $4,000 being raised.

For those unable to attend in person, the service was live-streamed online. A recording of that broadcast is now available to watch online here. Higher-quality video of the sermon can be viewed below. That sermon—“In Your Light We See Light”—President Robert Bugbee preached the sermon “In Your light, We See Light” based on Psalm 36:1-9.

“In God’s light, you see very well that it’s not enough just to take a swing down memory lane, to rhapsodize too much about the past, or to image we have been such wonderful people who have a great deal to be proud of,” President Bugbee preached. “Our anniversary, if it is to amount to anything worthwhile at all, is about finding our way back to Jesus Christ.”

Our anniversary, if it is to amount to anything worthwhile at all, is about finding our way back to Jesus Christ.