David and Goliath is a perennial Hollywood theme; some might wonder how many times Hollywood can tell the story of the little guy facing incredible odds and, against all hope, surviving and winning the day. At least that’s the way Hollywood tells it. Like the young David, Amazing Spider-man 2’s movie’s hero Peter Parker is really just a kid. He comes off as cocky and full of himself. Like David, Peter Parker is willing to stand toe-to-toe with a larger-than-life villain to save people in danger. In David’s case he was, in part, willing to face Goliath because the Philistine army was threatening to overrun Israel and rule them. In Peter Parker’s case, New York City is threatened by three villains, the chief of whom is Electro, a man who eventually becomes ‘electricity’ and as electricity is a giant of a villain.

At one point in the film Electro, in his electrical form, lights up an office tower making the windows into a gigantic grotesque image of his face as he taunts Spider-Man. Standing against the enormous face of Electro, Spider-Man looks small—like David standing before Goliath. On one level, Electro fits the bill of Goliath. On another level, though, he is more of a Satan figure wanting to plunge New York into his darkness. Electro says, “I will cut the light and soon everyone in this city will know how it feels to live in my world… a world without power… a world without mercy… a world without Spider-Man.”

Anyone planning to see this film would be wise to crack open a Bible and read chapters 16 and 17 of 1 Samuel—the part of the Bible with the account of David and Goliath. After reading it you will see easily that film-writers Alex Kurtzman and Roberto Orci (Star Trek: Into Darkness) the writers of The Amazing Spider-Man 2are not so much retelling this biblical narrative as appropriating elements of it to tell their story. Unlike the recent movie Noah—which was about the biblical Noah but deviated from the story—The Amazing Spiderman 2 isn’t about the biblical David per se. What is it then? It’s an analogy. The relationship between David and Spider-Man is metaphorical in nature.

Anyone planning to see this film would be wise to crack open a Bible and read chapters 16 and 17 of 1 Samuel—the part of the Bible with the account of David and Goliath.

Clearly the biblical David didn’t shoot spider webs and crawl on the side of buildings and Peter Parker doesn’t use a sling and five smooth stones to take down Electro. Still, knowing the story of David and Goliath makes the film more enjoyable and provides an opportunity to compare and contrast the biblical David with Marvel’s Peter Parker. Having a good grasp on the biblical story will also provide an opportunity to share it with others watching the film. But knowing it well will be key, because there is one big element of the Bible’s account missing from Kutzman and Orci’s analogy. 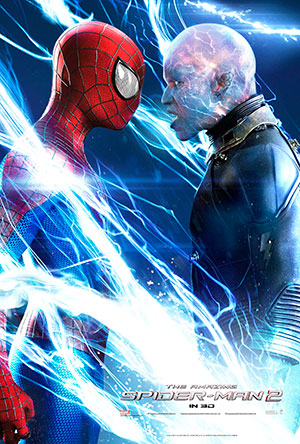 The Amazing Spider-Man 2 tells the story of Peter Parker as Spider-Man, whose fight becomes not simply against one villain or even a string of villains but rather against a corporation. Lurking behind all these villains is OsCorp and ultimately OsCorp is the Goliath Spider-Man is squared up against. When comparing David and Goliath with The Amazing Spider-Man 2, the thing readers of the Scriptural account will notice is that it’s the Lord—not David—who defeats Goliath. David is simply God’s instrument. This is the big missing part of the analogy in The Amazing Spider-Man 2. In many ways this is to be expected: this particular film is largely secular.

But there is one additional interesting concept woven into the fabric of The Amazing Spider-Man 2 that may be worth thinking about. Peter Parker as Spider-Man becomes the embodiment of hope for the people of New York City. He is merciful and kind, literally saving people in the midst of trouble and danger, and the people embrace him as their only hope. Keeping this in mind, remember how David in the Scriptures also points forward to Jesus. So in a similar way there are things about Spider-Man in this movie—as the embodiment of hope—that point to Jesus. Jesus, for the Christian, is the embodiment of ideas like Truth and Life. And in the sixth chapter of Hebrews, Jesus is described as Hope— “the Hope set before us.” He is Hope in the face of life’s troubles and dangers, and Hope in the face of death.

There are things about Spider-Man in this movie—as the embodiment of hope—that point to Jesus.

Is The Amazing Spider-Man 2 an amazing super hero movie? Overall the sequel is an improvement on the first film, but it feels a little unbalanced: the action sequences have a video-game feel while some of the dramatic scenes are uncommonly strong. Focusing in on the romance between Gwen Stacy and Peter Parker was a good move, but the film could have used that same sort of sharp focus overall. An example is in the number of villains: the film suffers from the classic super hero sequel trouble of having one too many villains. Two villains with OsCorp looming in the background would have been sufficient; three is excessive. The Amazing Spider-Man 2 would benefit from more editing and balance. Somewhere within its 2-hour 22 minutes running time there is a good solid movie—maybe even one that is “Amazing.”

Rev. Ted Giese is associate pastor at Mount Olive Lutheran Church in Regina. He reviews movies for both The Canadian Lutheran and Issues, Etc.