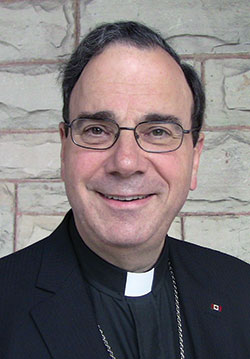 WINNIPEG – Lutheran Church–Canada (LCC) President Dr. Robert Bugbee has accepted what he terms “a very part-time call” to serve as Assisting Pastor at Beautiful Savior Lutheran Church in Winnipeg. The decision came after a lengthy period of prayer and consultation, as the voters of the parish had elected to call him already in mid-August.

“I have no doubt that this will be startling to many of our people across the country,” President Bugbee commented. “Since LCC’s founding in 1988, no LCC President has had this kind of tie to a local congregation. However, in the overall scheme of things it is not so unusual. The leaders of our partner churches in the United States and Germany, for example, are both called to carry out limited pastoral responsibilities in parish churches. In church history, too, bishops and church leaders not only oversaw administrative work for a larger area, but also assumed preaching and teaching duties in a concrete local place. My hope is that this can help me to grasp the challenges faced by LCC congregations today and keep me from becoming too isolated from what some would call ‘real life’.”

For their part, Rev. Cameron Schnarr and the leaders of Beautiful Savior have made clear that they understand President Bugbee’s synodical responsibilities take precedence. They are primarily envisioning assistance with preaching and Bible class work in the congregation, which has been growing in recent years and also maintains an active Lutheran school.

President Bugbee noted that LCC’s Board of Directors expressed concern that the proposed arrangement with Beautiful Savior Lutheran Church might create an overload for him. “They chose not to take an actual vote on the matter,” he added, “because they were very respectful toward the prayerful decision I would need to make. I thank God for the love they have shown me in expressing themselves so candidly. I am moved to embrace this very part-time call, and will continue to honour my ongoing commitments to the Synod to the best of my ability.”