Time Out won’t be back until at least April. Work has been very busy, and then comes a nice vacation. 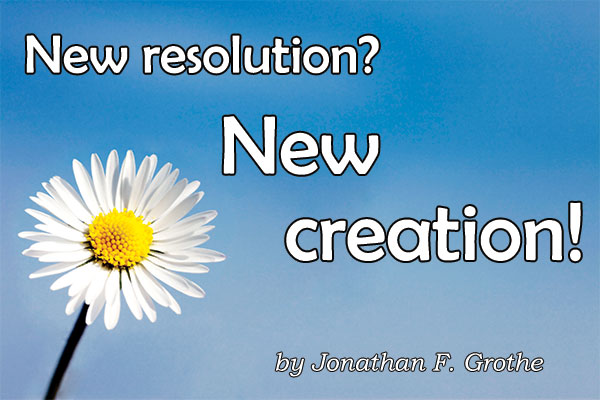 by Jonathan F. Grothe Having long since marked the sidereal cycle, human beings around the world celebrate the start of a “new year,” albeit not at the same time. Jewish communities and the Chinese, to give just two examples, reckon the new year differently from the way most of us do. And even our own “Gregorian” calendar has been standardized only since 1582, and not universally followed for years after that. In many cases these celebrations fill the community’s need for a religious ritual and/or a cultural festival: parades and parties … A meditation for Epiphany

The human body is a marvel of God’s creative wisdom and power. The body has such strength and resiliency. Yet, without the Lord’s preservation…

A meditation on John 1:1–14, the Gospel for Christmas Day

The Rev. Will Weedon, LCMS director of Worship and LCMS International Center chaplain, offers a meditation for Christmas Day.(Read more…)

A meditation for Christmas Eve

The Rev. Will Weedon, LCMS director of Worship and LCMS International Center chaplain, offers a meditation for Christmas Eve.(Read more…)

Christ the Savior is Born!

And it came to pass in those days, that there went out a decree from Caesar Augustus that all the world should be taxed.…

“It must be that time of year again,” the news announcer said. “People trampling each other to get bargains, atheists filing lawsuits over manger… 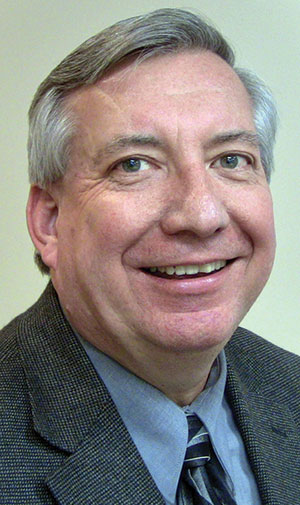 The Reason for Hope!

by Paul Zabel Why do you celebrate Christmas? Are you sure? The waters of our seasonal celebrations seem to get murkier every year. With “Happy Holidays” being spoken and advocated by some instead of “Merry Christmas,” and with the ever-increasing commercialism of Christmas by our friendly retailers, the real reason for the season can get lost in all the preparations and celebrations. Parents, in many instances, have to struggle to help their children to see past the gifts to the real Giver of Christmas. Individuals often get to the end of … 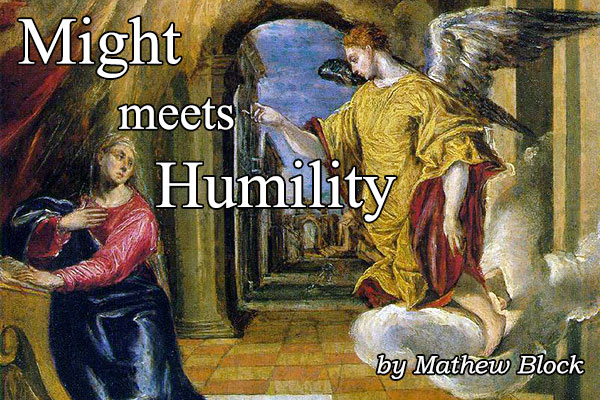 by Mathew Block I sometimes find myself wondering what it must have been like for Mary to be confronted by the angel Gabriel—to be going about daily life when the divine suddenly breaks in on the ordinary so clearly and undeniably. Here the supernatural trespasses on the natural in an unexpected, indeed, unexpectable way: an angel appears with a message from God Himself. This isn’t your typical Sunday School Christmas Program angel, either—a cute little kid in an oversized gown, white wings, and a droopy halo. We tend to imagine angels in …

Waiting for the Return

I will likely start episodes again after Epiphany, with new readings but replays of hymns until I get some fresh performances.

The Lutheran Order of Service for this 22nd Sunday after the high holiday of the most holy Trinity is available here in isiZulu and seTswana. Today it comes with a sermon based on God’s word from the prophet Micah in … Continue reading →. . . Read All 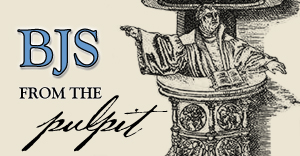 Text: Ephesians 5:22-33 [Wedding of John and Mary Smith; groom is an army veteran; names have been changed] One of the few things that my hometown of San Jose and the Smith’s hometown of Evansville have in common is that they were once the home of military contractors. San Jose had a huge FMC plant that, among other things, built the M113 Armored Personnel Carrier and the Bradley Fighting Vehicle. Evansville had huge plants, now idle or gone, that built dozens of different machines and ordnance for World War II, most notably the LST ships and the P-47 Thunderbolt. When you look at military vehicles or equipment, you can tell that they are built to last, compare to their civilian . . . Read All

“God Said It Was Good”

[Note:  This sermon was preached in Chapel at the International Center Tuesday, Oct. 22, 2013, by Rev. Steven Schave, Associate Executive Director of the Office of International Mission – An excellent example of a sermon that spoke stinging law and comforting Gospel to me – Herbert Mueller, First VP.] Text: Genesis 1:1-2:3 And God said it was good. And God said: it-was-good. Not sorta good, not kinda good, but when God saw His creation with its crown jewel of humanity… He said it was good, through and through. We had it all, paradise; well cared for, in want for nothing. Sickness, what is that? Pain, wow, sounds awful! I hope that never happens to me. Death, that would be a . . . Read All

Sermon for Pentecost 22, Proper 24C, preached on Sunday, October 20, 2013.. . . Read All     Of all the temptations prone to us as Christians, losing heart of the struggle, losing sight of the goal, losing focus on the purpose of your life in Christ, this is our greatest struggle.  Sure there are always those who get mad at the Pastor or the Church or the people or God and pack up their toys and go home, refusing to play anymore.  Underneath many of those folks, however, is a person who has simply lost his or her way in faith and uses the excuse to avoid facing up to it.    We might think that losing heart, losing sight, losing focus are all

…Jesus said to him, “Unless you see signs and wonders you will not believe.” The official said to him, “Sir, come down before my child dies.” Jesus said to him, “Go; your son will live.” The man believed the word that Jesus spoke to him and went on his way [John 4:48-50]. In the Name + of Jesus. Amen. Jesus scolds the official but he brushes this aside. He’s come to Jesus about an urgent matter. His son is about to die. The official does not lament that Jesus greets him with an unkind word. He doesn’t look for signs and wonders to explain why this has happened. He never surrenders hope that this man, Jesus is ‘very good,’ nor . . . Read All Every Age a Sinner, Every Age Needs Jesus – Pentecost 22

Text: 2 Timothy 3:14–4:5 “All scripture is breathed out by God and profitable for teaching, for reproof, for correction, and for training in righteousness…” This is the sedes doctrinae – that means the “seat of doctrine” – for the inspiration of Scripture. The words – all of them – that were written down by the Old Testament authors, by Matthew, Mark, Luke, John, by Paul and Peter and John (again!) and whoever wrote Hebrews and James and Jude came from God Himself. It wasn’t dictation like we are familiar with – no commands to “take a memo!” or any such thing – but was instead the Holy Spirit indwelling in all those faithful men  guiding them to record the very . . . Read All

Sermon for Twenty-first Sunday after Trinity

“A Parable of Persistent Prayer” (Sermon on Luke 18:1-8, by Pr. Charles Henrickson)

“A Parable of Persistent Prayer” (Luke 18:1-8) The parable Jesus tells in the Holy Gospel for today, from Luke 18, is traditionally called the Parable of the Importunate Widow. “Importunate” is an old-timey kind of word. It means “persistent in making a request,” even to the point of becoming something of a bother. And that would describe the widow portrayed in this parable. She was importunate. She was persistent in her seeking justice from an unjust judge. And Jesus is saying, through this parable, that this is how we in the church should be–importunate, persistent. Thus our text today is “A Parable of Persistent Prayer.” The parable is introduced with a brief explanation that sums up the main point: “[Jesus] . . . Read All

The Lutheran Order of Service for this 21st Sunday after the high holiday of the most holy Trinity is available here in isiZulu and seTswana. Today it comes with a sermon based on God’s word from the gospel of the … Continue reading →. . . Read All 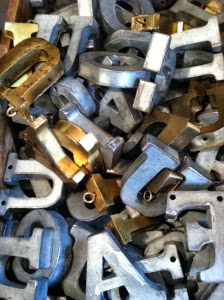 The Twenty-First Sunday After PentecostGenesis 1:1-23; Ephesians 6:10-17; John 4:46-54Grace and Peace to you from God our Father and the Lord Jesus Christ. Amen.We are used to broken promises and empty words, words that are vacuous; words that are simply lip service. Are we not?Politicians make campaign promises and speak words of hope, only for us to later realize that their campaign words were empty, non-binding, and that their words were unable to deliver. “Read my lips, no new taxes.  I will not cut funding for the farm bill.  I will create new jobs. I will balance the deficit!” and so forth.Let us not only pick on the politicians, for they are an easy . . . Read All

Never underestimate a Widow: she may be elderly, she may be poor, she may even be in poor health, but never, ever count her out. Don’t let your presuppositions about her—her meekness, her passivity, her seeming humility, even her faithfulness—cause you to doubt just how tough and tenacious a woman she was. She may not have the physical strength of Jacob, but she definitely has every bit of his endurance. She may not be physically wrestling like Jacob, but she is every bit as determined to prevail. She doesn’t have anyone in her corner, no protector, no patron—all she has is an absolute desire for justice, and while she has no real political or social power . . . Read All

In the Name of the Father and of the + Son and of the Holy Spirit All Jesus has for the nobleman, the official whose son was ill, was a word. The nobleman was looking for something else. After all, he came to Jesus from Capernaum to Cana, where Jesus p…