Greek Tuesday: Mass Hysteria Is Upon Us (Mark 13)

Are we at the end now? What are the signs that the end is actually present and upon us? What are the signs that the final end of the world is here? Questions about the Lutheran Ninja Clan and WEtv’s goals? Watch this video: https://youtu.be/wzVJ0CPh9JI or contact Peter Slayton at peter[at]worldvieweverlasting.com. Around the Word Devotions […] ↓ Read the rest of this entry… The post Greek Tuesday: Mass Hysteria Is Upon Us (Mark 13) appeared first on Worldview Everlasting.

2. A Prediction by EBible Fellowship that the World would End Today – Ken Samples, 10/7/15

Jesus and the Islamic Apocalypse

Today’s Islamic revival in all of its varieties–non-jihadist and jihadist (both Shi’ite Iranians and Sunni ISIS)–is motivated by a strong apocalyptic strain, the sense well-known to some Christians that the world is coming to an end, that prophecies are being fulfilled, and that the last judgment approaches.  Islamic apocalyptic thinking even has a role for [Read More…] . . . Read All

*This version contains a correction.* If you don’t pay very close attention to what the text actually says in Mark 13, you might end up a premillennial dispensationalist. And no one wants that! Good thing Pastor Fisk is here to tell you about the one word in Greek that can make all the difference if […] ↓ Read the rest of this entry… The post End Times Grammar Fail and Test Tube Babies (Mark 13:24-37) appeared first on Worldview Everlasting.

The End Times according to Islam

A major element in today’s jihadist movement is the Islamic doctrine of the End Times, according to Dr. Timothy R. Furnish in a lecture at Concordia Seminary in St. Louis.  From an account of the lecture: To establish a world ruled by Islamic law, Jesus and the Mahdi will battle against the deceiver al-Dajjal and [Read More…] . . . Read All 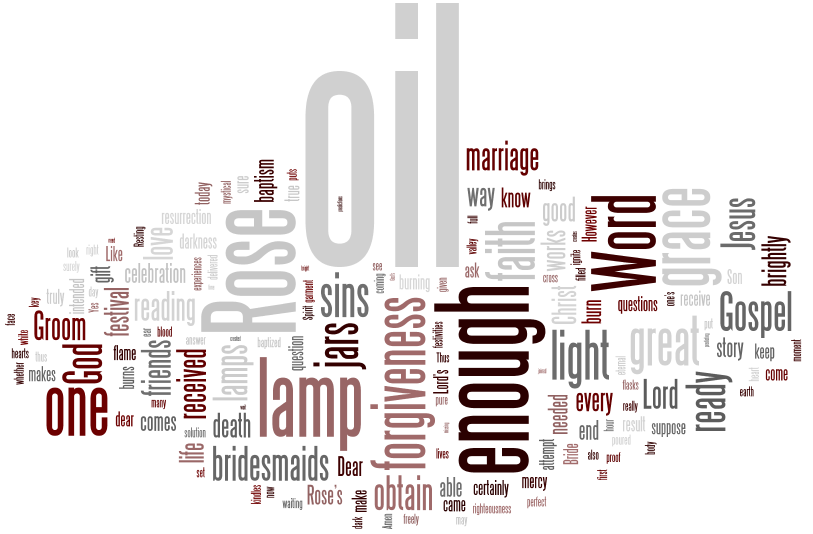 Oil For Your Lamps

The following is posted with family permission.  May the Lord give to the family of Rosella Huether Mekvold and to all who mourn, comfort in their grief and a sure confidence in the Lord’s loving care. Text: Matthew 25:1-13 Grace and Peace to you from God our Father and the Lord Jesus Christ. Amen. We really do not know the day or the hour, that is, we do not know the time of our death. Furthermore, we do not know the day or the hour of Jesus’ second coming.  Like a six o’clock television weatherman, we can make guesses and predictions, but that is about the best that we can do when it comes to predicting the end of it . . . Read All 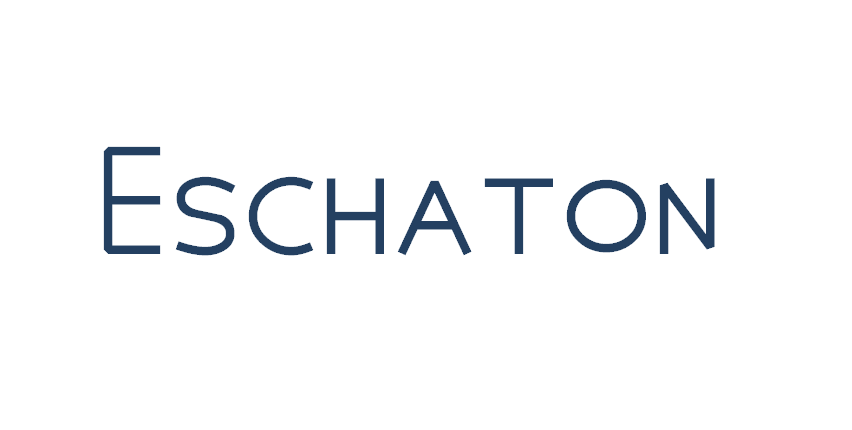 Things will be different at the great eschaton!  That is, things will be different when we are raised from the grave, when Jesus comes to make thing right again. What will be different? For starters we will ‘not’ pray The Lord’s Prayer.  The reason why this is so?  “In the Lord’s Prayer we are effectively praying against the old sinner in each of us, who would rather die than ask and who defining efforts take place on behalf of our own good names to build our kingdoms and to enforce our own wills.”[1]  Therefore, because our bodies will be raised imperishable and full of glory without the stain of sin, we will no longer fight against the old sinner, . . . Read All

Does God hate some sins more than others? Are some sins worse? Like sexual sin? And what’s the deal with the book of Revelation? Is there going to be an actual 1000 years of Jesus reigning here on Earth? How are we to understand what is going on in such a confusing book? Great questions […] ↓ Read the rest of this entry… The post Amillennial Ninjutsu appeared first on Worldview Everlasting. The Mist of Revelation’s Judgment and Comfort

Can you explain the concept of Revelation chapter 15? I can’t understand what it means.  I was watching the mist by Stephen King, and at one point it talks about how the mist is similar to chapter 15 of Revelation.  I know you might not like the comparison, but I’m a wondering!  Sincerely, RASTA KID Dear Rasta Kid: Revelation 15 begins with some joy as we see that the plagues about to be poured out are the last and in them the wrath of God will finally be finished.  This joyous news is followed by a joyous image of God’s children standing and singing next to a sea.  This scene is reminiscent of the children of Israel with Moses standing . . . Read All

Posted in Lutheran Blogosphere | Tagged End Times, Revelation, WE Got Answers, Worldview Everlasting - We Got Answers

The next Lay Bible Institute, led by David Peter, is “Decoding the Apocalypse: Study of the Book of Revelation.”

Dear Pastor Fisk, Reformed doctrine teaches that there will be a literal new earth after the one we’re standing on is destroyed. Proof passages for this include references to animals that are natural enemies frolicking with each other and dining on roughage (See Isaiah 11 and 65). Lutherans see the new earth rather as images of heaven. I see two implications: 1. There will be snakes in heaven (perish the thought.) 2. There will be pets in heaven. (My parents will be please with that.) ~M Dear M, In fact, Lutherans teach that we believe in the resurrection of the dead (of the body) and the life of the WORLD to come. We believe in a very physical “new heavens . . . Read All The cast of the AMC show “The Walking Dead” Editor’s note: Continuing the series of posts for the Easter season on the significance of the resurrection for our faith and the church’s ministry. Have you noticed that our culture seems to be obsessed with the apocalyptic?  Societal collapse, economic freefall, natural disasters, invasion by aliens, the 2012 Mayan apocalypse, the singularity of Artificial Intelligence, or a deadly pandemic which could wipe out billions – these are just a few of the scenarios that many people love to fear.  Such fears have led at least some to become “preppers,” stockpiling food, weapons, and other supplies in a bunker. One of the latest versions of apocalypse has resuscitated the zombie genre, first . . . Read All As if you didn’t have enough to worry about with your federal and state income tax forms due on April 15, now there is one more matter to be concerned with.  On that day (or actually at night) the moon will turn red, manifesting what many call a “blood moon.”  Many Christians see this as heralding a dramatic event in “end times” prophecy.  Likely some members of Lutheran congregations who watch premillennial preachers or read the literature of such ilk will be asking their pastors to provide an interpretation of this celestial event. During the early morning hours of April 15 one will be able to observe a total lunar eclipse.  This phenomenon occurs when the sun, the earth, and . . . Read All

Nobody Expects the Premillennial Dispensational Inquisition

Matthew 24:34, Luke 21:32 and Mark 13:30 all seem to speak of the world coming to an end before the apostles die. And yet, clearly, we’re still here!! So does this make God’s Word not true? Should we all be premillennial dispensationalists? (Boy, that’s a mouthful, so I hope not!) What’s the deal here? Or… […] ↓ Read the rest of this entry…

Will Pope Francis be the last pope?

In checking out the predictions for last year, I came across a post I wrote with this lede: More doomsday predictions, this time from the Roman Catholic side! According to writings attributed to St. Malachy in 1139, pope #112 will be the last one, and …

Radio evangelist Harold Camping has died at the age of 92.  Best known for predicting that on May 21, 2011, Jesus would come back, Camping’s most harmful teaching was that all church bodies were heretical and that people should just listen to his radio broadcasts instead of going to church. Longtime readers of this blog [Read More…] . . . Read All

Chapter 2 of 2 Thessalonians is even harder to translate than chapter 1! Pastor Fisk walks us through the entire chapter, pointing out places where there are multiple correct translation options or interpretations. The key this week is to remember that clear passages always interpret the unclear passages. Text: 2 Thessalonians 2:1-8 and 13-17 Join […] ↓ Read the rest of this entry…

In Case of Rapture, Can I Have Your Car?

I am a member of an LCMS church but I was raised a Pentecostal in an Assemblies of God church. I know we are Amillennialist but what exactly does that mean? Growing up Pentecostal I always heard about the end times and the rapture but where do we stand when it comes to those things. Thanks, ~P P – I think the best way to answer your question is to simply consider the beginning of Hebrews: “Long ago, at many times and in many ways, God spoke to our fathers by the prophets, but in these LAST DAYS he has spoken to us by his Son, whom he appointed the heir of all things, through whom also he created the . . . Read All

Posted in Catechesis | Tagged End Times, millenium, Rapture, WE Got Answers, Worldview Everlasting - We Got Answers

A field report from our “Director of Southern Hemispherical Operations” Henning van Rensburg, an end-time Nagel sermon, and some great Advent music.  And lots of guys with really cool accents.  Grab a cup of coffee and listen.