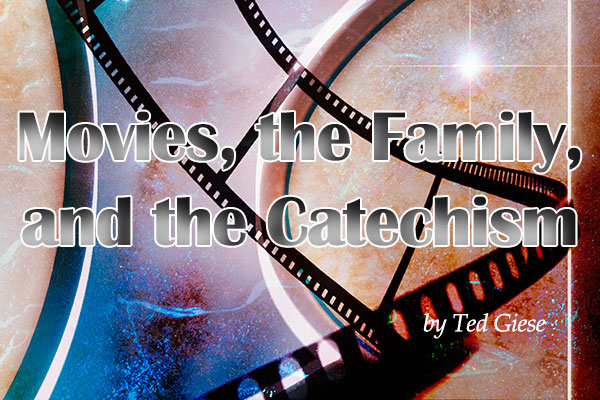 Movies, the Family, and the Catechism

by Ted Giese “All things are lawful,” but not all things are helpful. “All things are lawful,” but not all things build up. Let no one seek his own good, but the good of his neighbour. (1 Corinthians 10:23-24 ESV) Parents don’t often think of their children as their neighbours, but they are. In Scripture and the Small Catechism a neighbour is anyone who isn’t you. So “serving your neighbour” is at the heart of a parent’s vocation, including teaching the faith. Each section of Luther’s Small Catechism starts with the opening …

Further Thoughts on Noah at The Federalist

The Federalist has published a more in-depth review of Noah, written by me. Rather than rehashing and critiquing the choices of artistic license that worked or didn’t work (as many critical reviews seem to be doing), I wanted to address the theologically dangerous idea at the center of the film, which I also would hold is its fatal flaw. I hope you’ll give it a read. I think it’s worth your time, particularly if you’ve seen or plan to see the film. And, while you’re at it, take a look around The Federalist. It’s a great new online journal that has been putting out excellent stuff on culture, government, and other relevant topics. You won’t agree with everything there, . . . Read All

Noah. I saw it. You’d be better off not.

Noah – He doesn’t die. Update 3/31 – I’ve written some further thoughts. What are all these Christians thinking? They keep talking about this Noah movie. Talking and talking and talking. They urge Christians to see it in order to be able to talk with their friends about the message of the Scriptures, hoping that this might open a door. They claim that there are profound theological statements made in the film that are worth discussing. They say that this helps bring out the “dark” side of the Noah story rather than the happy Sunday School version that’s always told. What are all these Christians thinking? They’re so positive about this thing. Darren Aronofsky’s Noah is an expensive . . . Read All

By Larry Beane Leaving Eden is an interesting project.  It is based on notes written by Greg Batiansila the son of an LCMS pastor.  It is a web-based series (I created a YouTube playlist of all ten episodes below). [Note: if you want to watch YouTube videos on your TV, one way to do this is by streaming through your Roku player from your smartphone by using a free app called Twonky.  It isn’t nearly as complicated as it sounds.  Here is an article that can point you in the right direction.] The series is set in an LCMS congregation called Good Shepherd.  It openly makes references to being a Lutheran congregation, to Luther, . . . Read All