The Daily Fix: Are Catholics Catholic?

Rome talks a good game about unity, but a quick peak under the hood reveals that if you’re not united on what the Scriptures actually says, then you’re probably not united at all. The Daily Fix is a running commentary on life, death, the world, the Church, and what the Bible says God thinks about […] ↓ Read the rest of this entry… The post The Daily Fix: Are Catholics Catholic? appeared first on Worldview Everlasting.

There’s Only One Way to Law

Click here to view the video on YouTube. A controversy has arisen among us! Horrors! Shock! Gasp! But of course, as with everything else under the sun, this controversy isn’t new. In fact, nearly 500 years ago, our Lutheran fathers dealt with the s…

Is someone “once saved, always saved?” Is that what the Bible teaches? If you commit an egregious sin, does that prove you weren’t saved in the first place and still must be converted? Oh what tangled webs we weave when first we practice to…justify ourselves! Issues Etc Question of the Week Link: Pastor Fisk on […] ↓ Read the rest of this entry… The post Spiritually Stressed Out appeared first on Worldview Everlasting.

http://youtu.be/rHTJdJqkVbM Does Matthew 7:24 mean that we are saved by our works? Is the Bible really just “basic instructions before leaving earth”? Is the Sermon on the Mount all Law? We continue our break as Pastor Fisk transitions to his new c… 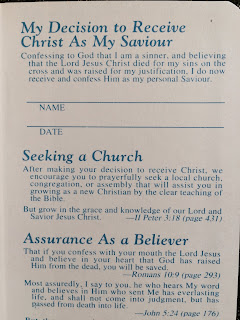 Why I Quit the Gideons

When I was a little kid, I found the pocket-sized New Testament that my father received from a Gideon when he was drafted. I used to carry this King James New Testament around with me and read it constantly, even though I found the language to be awkward and had difficulty understanding a lot of it. That was the first Bible that was really “mine.” I had other Bibles, but they sat on the shelf. This pocket New Testament went with me everywhere. It fascinated me that I was reading that particular New Testament because a Gideon gave it to my father in 1965. My next encounter with the Gideons was when I was in college at Murray State University. . . . Read All

Does God Need Our Good Works?

In The Fire and the Staff, author Klemet Preus explores the impact of the American Evangelical and Church Growth Movements on the modern Lutheran Church, reminding readers that practice and doctrine are inextricably linked for those who are the body of Christ. In the following excerpt, Preus discusses the doctrine of good works, helping the reader understand that God does not need our good works. Someone once asked Luther what God was doing before He created the world. Luther is reported to have answered, “Creating hell for people who ask such stupid questions.” God was not bored. He doesn’t “do things” except to bless us. The cupboards of heaven are not stuffed with jigsaw puzzles or stamp books for . . . Read All

We have often heard what good works are, since we have come to the light and to knowledge through baptism and through the gospel. We did not learn in the papacy what constitutes a good work. Before the gospel came, we were told that the works which we …

Concord Matters – Augsburg Confession Article XX: Good Works and the Role of Faith in Them

Baby, You’re No Good In Fights

Pastor Fisk takes on a question he answered two weeks ago in “You’re No Good But Tradition Is”, (http://youtu.be/oTbCOaON0xA) but this time he goes quite a bit deeper in addressing an internet meme designed to point out how Christians are all hypocrites. Which is true…if you claim that Christianity makes you a better person… But […] ↓ Read the rest of this entry… The post Baby, You’re No Good In Fights appeared first on Worldview Everlasting.

Don’t Judge a Sinner By His Sin

Are you less of a Christian if you struggle with habitual sin? Can you know if you or someone you know is saved by what they do? Shouldn’t there be progress in the Christian life, like getting better or something? Some deep questions in this episode answered with some awesome Gospel. Issues Etc Question of […] ↓ Read the rest of this entry… The post Don’t Judge a Sinner By His Sin appeared first on Worldview Everlasting.

You’re No Good But Tradition Is

This Friday, AskDaPastor tackles two questions. One about tradition and whether it is good for the church and another about being nice. Cause being a Christian makes you better than other people, right? So we should, like, totally be nicer than anyone else and make sure that they know we are nicer than them and […] ↓ Read the rest of this entry… The post You’re No Good But Tradition Is appeared first on Worldview Everlasting.

You are not more righteous or sanctified when you restrain your flesh. So what does it mean then when Paul talks about having the fruit of the Spirit? Is that something we are supposed to strive for, or is there another answer? If you’ve been watching WEtv for a while, I bet you already know […] ↓ Read the rest of this entry… The post Star Wars – John Williams = Jesus + Works appeared first on Worldview Everlasting.

In part 13 of our Catechism Series with Pr. Joe Abrahamson, we take a brief look at the “Table of Duties” in Martin Luther’s Small Catechism. How does this section of the Catechism instruct us in the “holy orders” to which God calls us? What are the “two kingdoms” and the “three estates” that this […]

The Formula of Concord has some portions that make it sound like we can look at our good works as evidence of our salvation, as in, we can find comfort in our good works because they are evidence of our justification. But is that what is really going on? Are we really supposed to find […] ↓ Read the rest of this entry… The post Righteous Pious Sows and Asses appeared first on Worldview Everlasting.

Paul’s epistles are not written in such a way that the first half is the Gospel and the second half is about how to live the Christian life. If you think that, then you’ve missed the entire point. So what are they about? And what does that have to do with the end of Romans […] ↓ Read the rest of this entry… The post You’re Not Worthy To Quantify Your Good Works (Romans 11:33-12:8) appeared first on Worldview Everlasting.

How the Sectarians Preach Justification by Faith: Luther.

From the Church Postil Ascension Sermon 48. When one understands and believes this text, then the teaching of the other text should follow, namely, that we should also do good works. Yet good works must accompany faith and depend upon faith, which always clings to Christ and pleads before God that he will graciously and for Christ’s sake accept and be pleased with the supplicant’s life and works, and not impute to him that which might be imperfect and sinful in him. Hereupon follows properly the text, Mt 28, 20: ”Teaching them to observe all things whatsoever I commanded you.” Fail not to observe the first and essential condition; for if faith is absent, all our good works and upright . . . Read All

Luther, Ascension Sermon, Church Postil    37. But you may say: Indeed, you yourself teach that a Christian must do good works; God himself commanded to do them, enjoining the keeping of the Law, and Christ also says: ”If thou wouldest enter into life, keep the commandments,” Mt 19, 17. Now, faith alone does not justify and save. This message must be understood as not excluding good works; but Christ here, in addition and beyond good works, also demands faith, which the Jews and heathen did not exercise. Our papists also hold that good works are not sufficient unto salvation for those who have no faith, but that faith and good works must go together. Nor do they mean by . . . Read All

I care very little if I am judged by you or by any human court… It is the Lord who judges me. Therefore judge nothing before the appointed time; wait until the Lord comes. He will bring to light what … Continue reading →. . . Read All