Poem on the Introits for Lent

A good devotion for Lent, and really any time of the Church year, is to review the Introit for each upcoming Sunday. At Trinity and St. Paul we use the Historic Lectionary, and the following is a poem I have written based on the Introits beginning with Invocabit (Lent 1) and ending with Palm Sunday. Tune: Kommt Her Zu Mir (ELH 189) Invocabit (Psalm 91:1-2, 9-10, 13, 15-16) O Jesus, in eternity You’ve dwelt in full divinity Within the Father’s dwelling. Begotten from the Lord Most High, You now in flesh to me draw nigh, Above all pow’rs excelling. I ask You, Lord, as Satan sneers, To crush his head and dry my tears, Which o’er my sins are flowing.. . . Read All 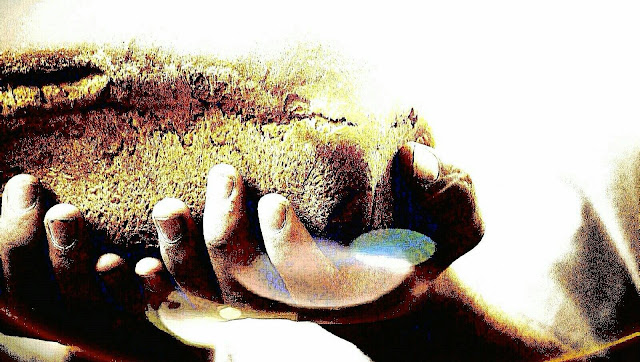 Not Too Much; Not Too Little 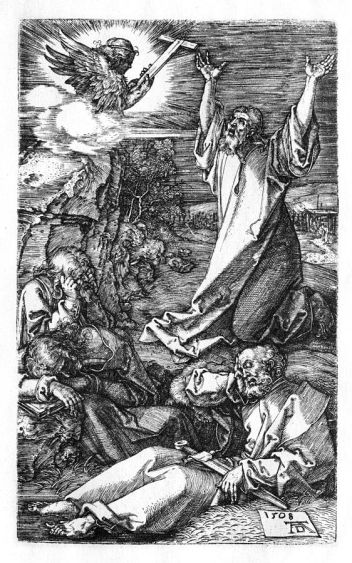 Turn Not From His Griefs Away. Wednesday after Reminiscere, 2016

Wednesday after Reminiscere (Vespers/Final) St. Peter Lutheran Church Passion History, Part 2: Gethsemane February 24, 2016 “Turn Not From His Griefs Away”   Iesu iuva   Introduction   It’s easy for us to pass over Jesus’ suffering quickly. To not allow it to sink in.   That is an indicator of the hardness in our hearts. Even if the account of Jesus’ Passion had nothing to do with us, sympathy and love for other people should cause us to feel pity and sadness when we hear about the agonies Jesus suffered without having deserved it in any way. But of course living in the world as it is, we are used to hearing about people suffering, experiencing tragedy, and dying. . . . Read All

Via the power of IFTTT Lent 2c, (February 21, 2016) Luke 13:31-35 TITLE: “Put Your Trust Where it Belongs” Grace to you and peace from God our Father and the Lord, Jesus Christ. Amen. Our text for today is the Gospel just read from St. Luke chapter thirteen. No one likes to hear bad news. When bad news comes, it is our instinct as human beings to blame the messenger. If I don’t know about the bad news, then surely the news doesn’t affect me, does it? Yet that is exactly the scenario we have with Jeremiah. In the prophet Jeremiah we have a picture or image of what Jesus would suffer in His ministry and death and life again. . . . Read All

The Pain Of Being A Christian

Text: Genesis 32:22-32 In the name of Jesus: Amen. The theologian C.S. Lewis once famously stated, “I didn’t go to religion to make me ‘happy.’  I always knew a bottle of Port [that is wine] would do that.  If you want a religion to make you feel really comfortable, I certainly don’t recommend Christianity.” What C.S. Lewis rightly understood was that when a person becomes a Christian, the real battle begins.  Dear friends, many people wrongly believe that when a person is baptized and converted that they can then take it easy, like someone . . . Read All

“Our Citizenship Is in Heaven” (Philippians 3:17 – 4:1) Citizenship is a big deal in our country right now, especially since this is an election year. There is talk about how to keep non-citizens out, how to keep them from entering our country. There is talk about which candidate or candidates may or may not be “natural born citizens” and thus eligible to run, and about what that term “natural born citizen” actually means. Our attention is drawn to our rights as citizens, guaranteed by the Bill of Rights. And we think of our duties as citizens, to be well-informed when we consider candidates and cast our votes. So citizenship is at the forefront of the thinking of many people . . . Read All 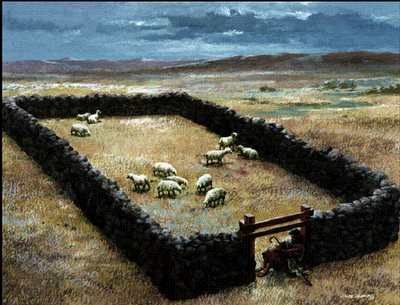 Lenten Midweek Sermon: “I AM the Door and I AM the Good Shepherd”

+ Lenten midweek sermon – February 17th, 2016 + Redeemer Lutheran, HB I AM the Door & I AM the Good Shepherd John 10:1-18 In the Name of the Father and of the + Son and of the Holy Spirit. Amen. Perhaps in English grammar class you were taught this simple rule: avoid mixed metaphors. “If he plays his cards right he might just knock it out of the park and let the cat out of the bag.” “Don’t open Pandora’s Box, you’ll find it full of Trojan Horses…after all, even Napoleon had his Watergate.” You see, our teachers were teaching us English as well as sparing us from sounding illogical, foolish, or being laughed at. So what . . . Read All 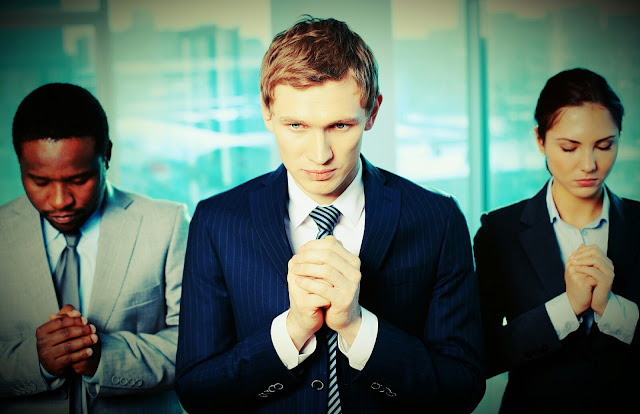 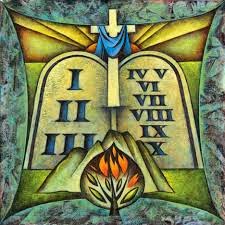 “The First Commandment: Have No Other Gods” (Sermon on the Ten Commandments, by Pr. Charles Henrickson)

“The First Commandment: Have No Other Gods” (The Ten Commandments) “You shall have no other gods.” OK, that sounds pretty simple. “Have No Other Gods”? Yeah, I can do that. After all, I don’t bow down to any idols of wood or stone. I don’t worship the Buddha or that crazy god of the Muslims, Allah. No, I’m a good American! You won’t catch me worshiping any other gods than the good old-fashioned American God, you know, the Big Guy upstairs. So I guess I’m good to go. If the rest of these Ten Commandments are as easy as the First, then I’m in pretty good shape. Wrong! It is precisely the First Commandment that will undo you! It is . . . Read All

Ash Wednesday February 10, 2016“Father, Forgive Them” Luke 23:32-34 “There were also two others, criminals, led with Him to be put to death. And when they had come to the place called Calvary, there they cruciﬁed Him, and the criminals, one on the right hand and the other on the left. Then Jesus said, ‘Father, forgive them, for they do not know what they do.’ And they divided His garments and cast lots.” (Luke 23:32-34) Their ignorance is not an excuse. It is not a defense. Jesus is not praying that God forgive them because they aren’t accountable for their crime. They are accountable. If they were not, they would have no need of forgiveness. Jesus points to their . . . Read All 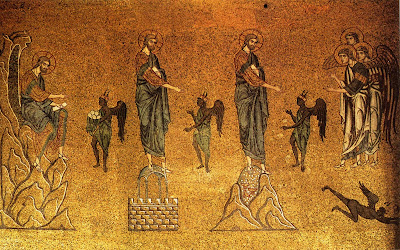 Lent 1 Sermon: “In the Wilderness”

+ Lent 1 – February 14th, 2016 + Redeemer Lutheran, HB Series C: Deut. 26:1-11; Romans 10:8-13; Luke 4:1-13 In the Name of the Father and of the + Son and of the Holy Spirit. Amen. Why are you here this morning? Duty, obligation, calling? Because mom or dad made you? The coffee and donuts? Whatever our motivation, there’s really only one this congregation exists. Only one reason we’re here this morning. Sin. This place is here for one reason – for God to expose and forgive our sin. That’s the only business of the Church. And that’s why you’re here – or should be. This is what Lent is all about: Jesus takes away your sin. Everything . . . Read All

A fine video on “What Is Lent?”

More good stuff from Concordia Publishing House. Thanks to Bruce Kintz, via Face Book. . . . Read All

Adam did battle with Satan in the Garden Paradise and lost. It was a no-contest, really. By the time round two came around, Eden had been a distant memory and Satan had home-field advantage. The desert wilderness couldn’t have been a more ideal setting to tempt the Second Adam. And once again, the devil used food as bait. This time it wasn’t the delicious fruit of a tree in Paradise, it was mere bread. But after fasting forty days and forty nights, our Lord was famished. Even stale bread would have tasted like a gourmet meal at this point. The first Adam had every advantage and still succumbed. The Second Adam had the deck stacked against Him, yet emerged victorious.. . . Read All

Watchword for this first week in Lent: For this purpose the Son of God was manifested, that he might destroy the works of the devil. (1.John 3:8b) Psalm of this week: „He that dwelleth in the secret place of the … Continue reading →. . . Read All

Giving up something for Lent

There is a great piece on Lent in the Federalist by my friend Todd Peperkorn. He makes an excellent case for the helpfulness of giving stuff up during Lent, especially in this day and age.  He does more than that, though, so read it all, linked and excerpted after the jump. From Rev. Todd Peperkorn, Why Lent [Read More…] . . . Read All 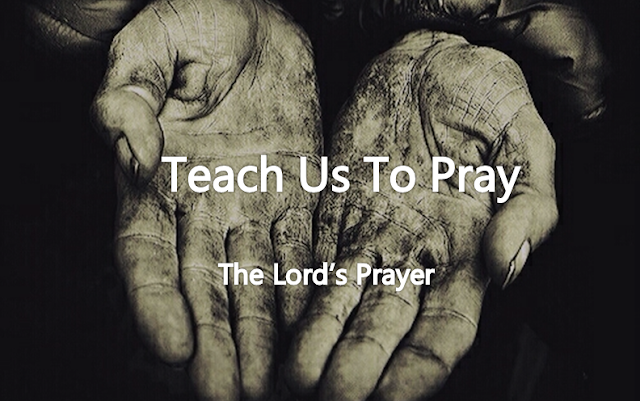 Prayer Is Not A Bargaining Chip, But A…

Text:  Matthew 6:5-18 In the name of Jesus: Amen. When we sinners try to open our mouths to pray, what typically happens is this: instead of humble praise and thanksgiving, out comes a confession to God of our own greatness and accomplishments.  It is this way because our tongues and mouths are coated with the dirty ashes of sin.    It gets worse though.  Instead of Godly requests for mercy and pleas for grace, we typically attempt to bargain with God through prayer.[1]  That’s right; we create a barter system where we . . . Read All

Faith’n’Family – Learning about Lent at Home

Return To Me With All Your Heart. Ash Wednesday 2016

Ash Wednesday St. Peter Lutheran Church Joel 2:12-19 February 10, 2016 “Return To Me With All Your Heart” Iesu iuva     “Yet even now,” declares the Lord, “return to Me with all your heart, with fasting, with weeping, and with mourning, and rend your hearts and not your garments.” Joel 2:12   “Return to Me,” God says at the beginning of Lent.   And possibly, you are thinking, “Return? But I’ve never left you, Lord. I believe in Jesus. I’m not aware of any grave sins in my life, only the normal struggles with sin that none of us can avoid.”   When Adam and Eve sinned in the garden of Eden, they were too busy to stop and . . . Read All

When Jesus Fought Temptation in your place, he wasn’t worried too much about your battle with cupcakes, so much as your battle with the devil. And Jesus won it for you. The Daily Fix is a running commentary on life, death, the world, the Church, and what the Bible says God thinks about it all. […] ↓ Read the rest of this entry… The post The Daily Fix: Since Jesus Doesn’t Hate Cake appeared first on Worldview Everlasting. 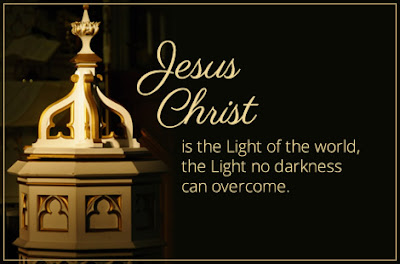 Ash Wednesday Sermon: “Jesus Christ is the Light of the World”

+ Ash Wednesday – February 10th, 2016 + Lenten sermon series: I AM sayings in John’s Gospel John 8:12 In the Name of the Father and of the + Son and of the Holy Spirit. Amen. I am the light of the world. Whoever follows me will not walk in darkness, but will have the light of life. Seems like a strange verse to reflect upon on this Ash Wednesday. We live in a world enveloped in darkness and the shadow of death. The blindness of man’s sin rages on: the world rejoices in the destruction of marriage and family and calls it love and choice; pro-abortion advocates are upset about a Doritos commercial that humanizes a baby in utero; men . . . Read All

“Why We Don’t Do Ashes on Ash Wednesday”

Today is Ash Wednesday, the beginning of Lent.  I love the rite of the imposition of ashes, when the pastor marks our foreheads with the sign of the cross made in ashes, with the words “You are dust, and to dust you shall return.”  We need to remember that fact. But what I want to [Read More…] . . . Read All

Encore: Does the Season of Lent Have Pagan Origins? – Pr. Joseph Abrahamson, 2/9/16

Pr. Todd Peppercorn of Holy Cross Lutheran-Rocklin, CA The Crux of the Matter

Here’s this mornings sermon preached in St.Timothy’s chapel of the Lutheran Theological Seminary by Rev Dr. K. Boehmer on Luke 9,18-22:  Now it happened that as [Jesus] was praying alone, the disciples were with him. And he asked them, “Who … Continue reading →. . . Read All