Why You Should Think of Your Pastor as a Priest

In keeping with the theology of the Old Testament, some Christian churches (including many Lutheran ones)[i] have retained the custom of referring to clergy as “priests.” Now it is not my purpose to argue for a return to this terminology or to disparage the use of the designation “pastor.” However, when we react against this terminology as if it were from the devil, we operate with a deficient understanding of pastoral ministry. In my own mind there has been wall of separation between the word “priest” and anything that our Lord might expect of a pastor. Part of this is because I was raised Roman Catholic, and that fact in itself has sometimes made Lutherans suspicious of me.[ii] Worse, . . . Read All

What’s this??? TWO new shows? Yes! Pastor Matt Richard joins us for a new show called Lightning Cuts where he answers your questions quickly and concisely. Which is much easier to share with your friends! This week he talks about the Divine Call. Are you called to be a pastor? How do you know? And […] ↓ Read the rest of this entry… The post Lightning Cut: The Divine Call appeared first on Worldview Everlasting.

The Prophetesseses Have Passed On

Click here to view the video on YouTube. If there were prophetesses in the Old Testament, why can’t we have women pastors today? And how can baptism save you if all you must do is believe? Pastor Fisk tackles two, count them, TWO great questions in…

Can You Explain Absolution?

Dear WE: Love your show. I am a new Lutheran, well sort of. They haven’t confirmed us because we are in between pastors. But I hope to be one soon. My question is this, can you explain absolution (i.e., John 20:23). This verse appears to be speaking to the apostles. Since cessationism is pretty clear, and we all know Roman Catholic apostolic succession is wrong, how is this verse still prescriptive for the Church today? Thanks, A Dear A., One of the neat things here at Worldview Everlasting is that we have a great group of pastors that can address questions, such as yours. In our discussions about your question, Pastor Matt Lorfeld was able to dig up a quote . . . Read All

Posted in Lutheran Blogosphere | Tagged Pastor, WE Got Answers, Worldview Everlasting - We Got Answers

What does Walther say about the Preaching Office?

As the subtitle of the original German edition states, The Church and The Office of The Ministry is “a collection of testimonies . . . from the Confessions of the Evangelical Lutheran Church and from the private writings of orthodox teachers of the same.” Professional church workers and interested lay members will find a wealth of insights from the Bible, the Confessions, ancient church fathers, Luther, the orthodox Lutheran fathers, and more on the key questions of what or who is the Church, what is and who holds the Office of the Ministry, and what are the powers and duties of each. As we approach the commemoration of Pastor C. F. W. Walther on May 7, we offer the following . . . Read All

The text for this lesson is Acts 15:1–16:5 Key Point Human reason believes, as many did in Paul’s day, that we must do something to be saved. Yet the answer is always Jesus, Jesus, only Jesus, whose resurrection from the dead sealed our salvation a…

Call Day–What’s It All About?

Every year around this time, our two Lutheran Church—Missouri Synod seminaries are buzzing with excitement over Call Day. Many people in the LCMS—from seminary students and their families, to district presidents, to pastors, to calling congregations—have been anxiously awaiting its arrival. But what exactly is “Call Day”? We asked one of our editors, Rev. Dr. Benjamin Mayes, to explain. What Is Call Day? Call Day is the day when candidates for the pastoral ministry receive their first calls to serve as pastors, missionaries, and chaplains.[1] In The Lutheran Church—Missouri Synod, this happens in services each year, held at the two seminaries in St. Louis, MO, and Fort Wayne, IN.[2] A “call” here is a summons extended . . . Read All

How Does One Know They Are Called To The Ministry?

Dear WE: Two questions one and the same: How did you know you were called to the ministry, and similarly how would one know this for their self? Thanks, L. Dear L: I know I was called because on April 24, 2009, I received a Divine Call through the Church to serve Messiah Lutheran Church in La Crescent, MN. A little explanation may be helpful here. A “call” can be either an immediate or a mediated call. An immediate call is a call directly from God. This kind of call is always accompanied by a “theophany” (an audible/visual call), such as the prophets, disciples, and the Apostle Paul received. Apart from this, all other calls are mediated calls, that is . . . Read All

I took Summer Greek. The summer is long past. I’m still writing about seminary. Therefore, I must have passed Greek, right? Yes! And I danced a jig like Bruce Willis. Nowadays, I’m on Christmas break which is in the middle of Winter quarter. I’ve fallen in with the herd and have a mostly typical class schedule. Let me tell you about what I just finished up in the Fall 2014 quarter. (For sake of a little brevity, I’ll use the following weekday abbreviations: M T W R F) Liturgics I – taught by Dr. Paul Grime, Dr. Arthur Just, Dr. Timothy Quill, and Kantor Keith Hildebrand. Not all of these gentlemen were in the classroom at the same time. As . . . Read All 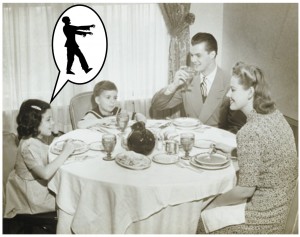 Lutherans and Zombies – More Stuff to Annoy the Pietists

There at the dinner table her song began as expected, being carried along by a mesmerizing joy afforded only to three-year-olds. But no sooner than the songstress had woven her whimsical serenade—ever briefly, ever swiftly—did the course change and life was forever different. “Here’s the church,” she sang so proudly with hands and fingers folded inward hiding the parish residents. “And here’s the steeple,” she sing-songed with her little precious fingers pointing heavenward. “Open the doors,” she intoned with angelic purity, “and see all the ZOMBIES! Blah! Blah! Blah!” Wow. Let’s just say that I was concerned for a moment that I may have to perform the Heimlich maneuver on my wife and oldest son because they had food in . . . Read All 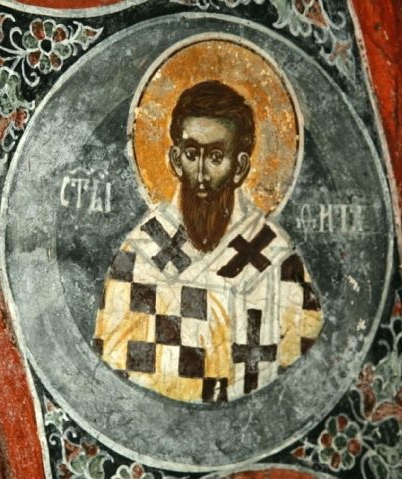 26 January, New Testament Saint Titus, Pastor and Confessor was sent by Paul as bishop and pastor to Crete. Along with his other duties, he was also to “appoint elders in every town (Titus 1:5)” — in other words, he chose and consecrated the first generation of Cretan pastors and appears to have been the island’s de facto bishop. While there, he was to himself be a faithful shepherd for Christ’s flock as he trained and placed others into the Office of the Holy Ministry. Titus is mentioned as Paul’s companion in some of the epistles: 2 Corinthians 2:13; 7:6, 13-14; 8:6, 16, 23; 12:18; Galatians 2:1-3; 2 Timothy 4:10. The letters Paul wrote to Titus. . . Read All 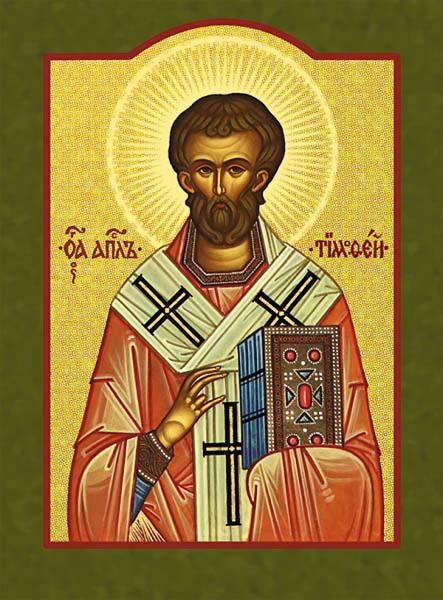 24 January, New Testament Today we commemorate Saint Timothy, Pastor and Confessor. The festival days for Pastors Timothy and Titus are set on either side of the day marking Saint Paul’s conversion. This proximity reminds us of their connection with t…

God calls his prophet Jeremiah: “Arise, and speak unto them all that I command thee.” (Jeremiah 1,17) and St. Paul writes to the Corinthians: “For we preach not ourselves, but Christ Jesus the Lord.” (2.Corinthians 4,5)  God himself calls his … Continue reading →. . . Read All Congregations and their pastors have until April 15 to apply for sabbatical grants of up to $50,000 from Lilly Endowment Inc.(Read more…)

For spending more hours than normal each week writing extra sermons, For braving the children’s pageant where little Elizabeth will inevitably set her dress on fire, For sacrificing time with your family each Wednesday or Thursday night, For preaching about the same things every Advent and Christmas even though those of us in the pew should remember it by now, […]. . . Read All

I operate off this really great theory that if I pick up Christmas gifts for people throughout the year, I won’t have a feeling of panic a week before Christmas when I still don’t have presents for half my family. It’s good. In theory. Let’s face it: I’ll let you know when I stop breathing into […]. . . Read All

The Psalmist declares: “I have not hidden Your righteousness within my heart; I have declared Your faithfulness and Your salvation; I have not concealed Your lovingkindness and Your truth From the great assembly.” (Psalm 40:10) and St. Paul writes to St.Timothy: “Therefore do not … Continue reading →. . . Read All

the danger of subjectivity

What I’m about to say may set radical feminism back about 50 years, but we’ll burn that bridge when we get there. As a woman, I don’t have to hear another woman have an opinion on something in order to form one myself. That was a little confusing. What I mean is: I’m a woman who’s […]. . . Read All

In days gone by, the pastors who served at Lutheran congregations generally did not try to appear to be “cool,” “hip,” or, in any other way, did they attempt to be a part of the youth culture that was prevalent among the young people of their parishes at the time. I doubt that these pastors were mean or cruel in any way. I am certain that there were, among the pastors of the 19th and most of the 20th centuries, flashes of righteous anger and/or flares of temper when children were misbehaving or some illicit or disruptive behaviors were going on. That was certainly the case in the pastors that served my family. But, I imagine, most of these pastors . . . Read All Me. Greek. The Octagon. The Beat Down.

They told me: Current latter-year seminarians; Recently installed pastors; Pastors with a decade or two under their belts. All of them had the same reaction to my statement, “I’m taking summer Greek.” Shadow fell upon their faces. The temperature in the room turned frigid. The lights, even the florescent ones, dimmed and flickered. Horror movie music spontaneously played from their cell phones. Freakishly. “You’re. Taking. Summer… Greek…” Although they said it in a complete sentence, I heard the sympathy in their voices as if they had paused after each word. Okay, I may be exaggerating just a little but without a doubt, all of them spoke of summer Greek as a daunting task that deserves serious respect and consideration. Yet, . . . Read All