Stealing Away Your Secret Rapture (1 Thessalonians 4:13-18)

What happens when you can’t even pronounce the book of the Bible from which you are teaching? Hilarity ensues!! But don’t worry, there is still great teaching to be had as Pastor Fisk covers the end of days, facing death, the “rapture”, dead people rising and how Jesus won’t be sneaky at all when he […] ↓ Read the rest of this entry… The post Stealing Away Your Secret Rapture (1 Thessalonians 4:13-18) appeared first on Worldview Everlasting. 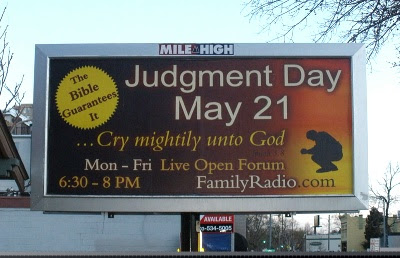 Harold Camping: I Was Wrong

Last year the preacher failed twice in his end-of-the-world predictions. Summary: Humbled Christian broadcaster Harold Camping now says he is no longer in the business of forecasting the end of the world. Last year Camping twice set dates, first for the Day of Rapture on May 21 and later for the end of the world on October 21.“We humbly acknowledge we were wrong,” Camping and staff members told supporters in a letter on the website of Family Radio, Camping’s broadcast ministry. Camping says he and his network are no longer interested in predicting when the world will end.Camping originally predicted the saved would be raptured to heaven on May 21 while those left behind would face months . . . Read All

Law and Gospel – Shock and Awe, Age of Accountability, The Rapture

Nobody Expects the Premillennial Dispensational Inquisition

Matthew 24:34, Luke 21:32 and Mark 13:30 all seem to speak of the world coming to an end before the apostles die. And yet, clearly, we’re still here!! So does this make God’s Word not true? Should we all be premillennial dispensationalists? (Boy, that’s a mouthful, so I hope not!) What’s the deal here? Or… […] ↓ Read the rest of this entry…

Chapter 2 of 2 Thessalonians is even harder to translate than chapter 1! Pastor Fisk walks us through the entire chapter, pointing out places where there are multiple correct translation options or interpretations. The key this week is to remember that clear passages always interpret the unclear passages. Text: 2 Thessalonians 2:1-8 and 13-17 Join […] ↓ Read the rest of this entry…

In Case of Rapture, Can I Have Your Car?

I am a member of an LCMS church but I was raised a Pentecostal in an Assemblies of God church. I know we are Amillennialist but what exactly does that mean? Growing up Pentecostal I always heard about the end times and the rapture but where do we stand when it comes to those things. Thanks, ~P P – I think the best way to answer your question is to simply consider the beginning of Hebrews: “Long ago, at many times and in many ways, God spoke to our fathers by the prophets, but in these LAST DAYS he has spoken to us by his Son, whom he appointed the heir of all things, through whom also he created the . . . Read All

Posted in Catechesis | Tagged End Times, millenium, Rapture, WE Got Answers, Worldview Everlasting - We Got Answers

Well, it’s May 23rd and we’re all still around.  That means more madness from the Manly Doctors of Divinity, the Irreverent Reverends of Religiosity, the Supreme Sultans of Sarcasm.  Firmly believing that you can’t kick a dead horse…

Episode 139: The “Last Ever” Pre-Rapture Edition

Since the Rapture is scheduled for May 21st, the Manly Doctors of Divinity usher in the end of the age with a rousing tribute to eschatology guru Harold Camping.  We’re not expecting to be around next week, but you might want to check in here j…